The Isle of Skye has been named the nation’s most desired place to live, after almost 24,000 people were asked by Rightmove where they would most like to live in Great Britain.

It’s clear the nation wants a room with a view as the top ten most desired places to live are islands, seaside towns and places of outstanding beauty across Great Britain.

The popular seaside resort of Woolacombe in Devon made second place on the list, with one of the most expensive seaside towns of Salcombe in Devon coming eighth, where average asking prices are just below those in London, at £635,083.

Four places in Cornwall make the top ten: the market town of Callington, the surfer’s seaside town of Newquay, the fishing port of Padstow and holiday favourite St Ives. Flying the flag for the north are Keswick and Ambleside, both in the beautiful Lake District.

The top 10 most desired locations to live in Britain are:

Rightmove’s Research Manager Abiola Oni comments: “The nation clearly want to retreat from the hustle and bustle of the city and settle down in some of the most beautiful places around Britain, from as north as the Isle of Skye to as south as the glitzy town of Salcombe. It’s interesting that none of the areas are in the highest priced regions of Britain, London and the South East, likely because the appeal of some of the big cities is the good job options and transport links rather than moving for the amazing scenery.”

With the weather turning and the days growing shorter, attention is shifting to the darker months ahead and keeping our homes warm.

One way of making a home more cosy this winter – and potentially saving money along the way – is installing a wood-burning stove.

While the initial outlay can be expensive, they can reduce your fuel bills, while at the same time being a fashionable addition to your home. 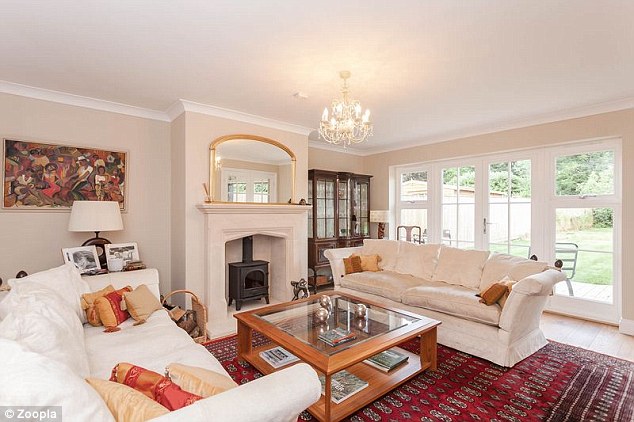 Why have sales risen in the past decade?

Wood-burning stoves were traditionally found only in countryside homes, which had a shed of wood close by and draughty rooms to keep warm.

But Paul Chesney, who runs the upmarket fireplace shop Chesney’s, says: ‘A decade ago, wood-burners were just not found in towns and city homes, but they’ve since gain ground in urban areas.’

He adds that they remain popular in countryside homes.

Hugh Wells, vice chairman of the Stove Industry Alliance, said: ‘Installation figures have flattened recently due to winters not being so cold and the oil price being down. These factors do have an effect.

‘Wood-burning stoves are generally installed for a reason, such as a secondary heating supply or to save money. There is a percentage who have them installed because they are fashionable.’

House prices will rise by more than £50,000 in some areas over the next five years, Savills forecast, as it mapped out potential property gains across the UK. The typical value of a home across the country will rise 13 per cent by the end of 2021. However, the biggest monetary gain is tipped for the South East, where higher prices combined with a larger percentage (17%) increase led to a forecast rise of £53,200 over five years. And the South West is forecast to enjoy a 14% increase by 2021 producing an average price of £272,000.

We are a nation of animal lovers. We love our pets dearly, especially cats and dogs. They offer companionship and comfort to millions thoughout the UK and are treated like members of our own family. So which ones would cause the most damage to your home?

To mark National Cat Day on October 29th, Admiral has looked at claims involving cats, and dogs to see which cause the most accidents and which could potentially cause the most headaches for proud homeowners.

Homeowners who want to get a pet but can’t decide between a cat and a dog might want to consider new research carried out by insurance expert Admiral. It has looked at all home insurance claims involving dogs and cats in the last year and has found dogs are a much bigger liability. In fact doggy disasters outnumber feline cat-astrophes by four to one.

In its research,  Admiral looked at all its home insurance claims involving cats in the last year. It identified 51incidents caused by cats. Over the same period, its customers had registered 195 claims due to dogs.

Was the difference because there are more pet dogs than pet cats in the UK? Well according to the Pet Food Manufacturers Association there are around 16 millions dogs and cats in the UK, with dogs accounting for slightly more than half of them at 53%. So why did dogs account for 79% of all the accident claims Admiral received involving the two animals?

John McSherry, head of Household Claims at Admiral, gave his insight: “Our data suggests dogs are just more accident prone than cats. So if you’re house proud, are looking to get a pet and can’t decide between Fido or Mittens, I’d suggest you go for a feline friend.

That said, a dog can deter potential burglars, and while I’ve known some feisty cats in the past, I’m yet to meet a guard cat. I guess you just need to decide what you want from your pet and do what you can to prevent accidents involving either of them happening in the first place.”

The view that dogs are the more accident prone is supported by the types of claims involving the two different animals. Those caused by cats tend to involve them knocking things off shelves and tables, in particular, glasses of red wine or iPads and tablets. The other common cause of cat related claims is clawed furniture.

Dogs on the other hand tend to cause damage with their teeth, with phones and glasses being particularly popular. Dogs also tend to get over-excited and knock over furniture. And there is the problem that dogs are more likely than cats to have ‘accidents’ of their own around the home. This is probably because it’s a lot harder to teach one to use a litter tray!

Admiral has gone through all the claims to choose some of the more unusual cat and dog related ones.

Ten cats who have had better days

1. The cat who brought a pigeon into the house and ate the head on its owners peach coloured carpet
2. The cat who knocked over red candles during a power cut and walked the wax through the living room
3. The cat who came in with red paint on its paws and left a trail around the entire house
4. The cat which made its owner jump so much when she jumped up onto the kitchen counter where he was working, he spilt wine over his laptop and knocked it onto the floor
5. The cat who went to investigate when it’s owner discovered a leak under his bath and subsequently fell through the water damaged floor
6. The cat who attacked a black candle on its owners mantelpiece, realised the wax was hot and flicked molten wax all over the carpet below
7. The cat who knocked a full bottle of red wine all over a brand new, light grey carpet
8. The kitten which managed to turn on the hot water tap in a sink that had the plug in, causing the sink to fill and overflow
9. The cat which attacked its owner’s foot as he was carrying his laptop and filling the bath. Needless to say, the laptop got wet
10. The cat which repeatedly jumped against the glass in the French doors, eventually cracking the glass

1.The German Shepherd, weighing 33 kg who stood on its owners glasses, breaking them
2. The dog who got hold of a can of engine oils and emptied it over its owners stairs and landing
3. The dog who managed to switch on the hairdryer while its owners were out. The hairdryer was on the sofa and melted hole in it
4. The puppy whose owner is a model maker, who got hold of a small pot of red paint which he dragged through the hall and up the stairs
5. The dog which chewed two hearing aids belonging to the gentleman who was dog-sitting him, causing irreparable damage
6. The two dogs who got excited when their owner was painting the skirting boards, tripping her up and sending the pot of gloss flying over the sofa
7. The poor dog who gets separation anxiety and chewed holes in its owners carpet when left alone for an hour
8. The dog who gave birth to seven puppies while on her owners carpet
9. The dog who got over-excited when it saw another dog on the TV, jumped up and knocked it over, cracking the screen
10. The dog who knocked over a 30 litre fish tank in its owners dining room

We’ve just exchanged contracts on a house purchase in Teignmouth and our estate agent was extremely helpful in facilitating all the many interactions that took place. Very friendly and easy to deal with too.

Couldn’t be more pleased with the level service provided by Steve and his team at Chamberlains. Nothing was too much trouble and a successful outcome was achieved very quickly and efficiently. Thank you!

Just 2.6% of the UK housing stock is classed as a retirement property despite significant demand among older people, according to Knight Frank.

Analysis of data from the Elderly Accommodation Counsel found around 715,000 homes loosely classed as ‘retirement housing’, ranging from age-restricted developments to close care housing, while separate research by Knight Frank found that 25% of over-55s said they would consider moving into purpose-built retirement housing in the future.

Knight Frank’s latest Retirement Housing report said some 7.8m people, or 18% of the population, is aged over 65, with 12% of the population aged 70 or over. It points out that providing more suitable property for older needs could also free up wider housing stock.

Emma Cleugh, head of institutional consultancy at Knight Frank, said: “Increasing the provision of housing suitable for older people will have direct benefits across the whole housing market, for all generations.

“There is significant appetite in the market to develop and invest in the retirement housing sector and provide specialist and aspirational housing that the older generation now demands.

“Now that the resolution of the OFT and Law Commission investigations into event fees in the retirement housing sector looks to be on the cards, we anticipate significantly increased levels of activity across the sector.

“However, it remains to be seen whether the scale of investment will begin to re-balance the current mismatch between supply and the pool of demand in this market.”

Michelle and the team @ Chamberleigns have been fantastic since day one.

Putting our property up for sale was quick and easy, the photos were of high quality and we felt they represented the property well. Chamberleigns are hot with marketing, using modern ways to market your property to ensure the highest possible visibility to potential buyers, and they even notify you every time they advertise on a different platform!

Michelle was always in contact with us, even through the quiet times, keeping us up to date with the market behaviour and keeping our property advert up to date and appealing.

What we loved most was how much care Michelle showed towards us, and how nothing we asked for was too much.

Thanks again for everything.

We are so grateful to Laura for all her hard work in making it happen for us. We love the flat and feel settled already.

Many Thanks
Yvette & Pete Davenport